I started fishing about 5 years ago and I’ve always been a bait fisherman, possibly because I’m extremely lazy. Chuck some squid out on a hook, sit back, relax and hope some unlucky fish swims past and eats what you are offering. It works, which is why a lot of people do it, but I’ve learned that it’s not the only way to fish.

About a year ago I attended a tinny and tackle show, all tinnies and no tackle, and as I was wandering around looking at boats I can’t afford, I came across a super tank. Now for those who have never seen them, imagine a semi-trailer with a glass side and full of fish, basically a huge aquarium.

Now having seen everything else at the show, I plonked myself down in a seat and waited to see what would happen. A bloke popped up at the top and started yacking on about lures and how to fish them and at this point I started to drift off as I’d tried hard body and soft plastic lures before and had no luck so I thought they were useless and I’d decided to stick with bait. 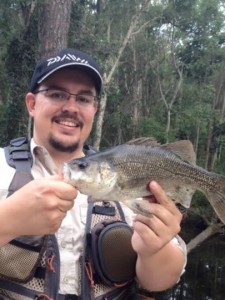 The bloke on top of the tank droned on some more then he started to flick the lures into the tank to show how they worked and ooh wow, the lightbulb came on for me!

You see, when I’d tried lures before, both hard and soft, I’d just chucked them out as I would a piece of bait, then knowing that I had to do something with them, wound them back in again. I had no idea how they behaved in the water and what I had to do to them to get them working properly.

Over the next 20 minutes I watched, very intently I can assure you, as the bloke threw lure after lure into the tank and explained and showed how they worked and what you needed to do with your rod to get the correct action on them. I can pretty much pinpoint that as the moment in time when I became obsessed with lures.

Actually seeing how they worked made such a difference and if you get the chance I strongly recommend you attend a boat show where they have a super tank so you can see for yourself how different lures work underwater and how the fish react to them. After my visit to the show I hit up Mark at Tackle Land the next day and grabbed some advice and hard body lures and proceeded to get out there and begin to catch fish. 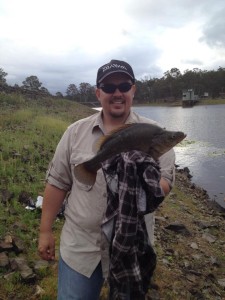 Now the title of this article says soft plastics but bear with me, I’m getting to them. I started with hard body lures simply because they look like small fish, or at least some of them do, and I figured that fish would eat things that look like fish and to a certain extent this works. I couldn’t get my head around how these funny looking, colorful bits of plastic would work.

So I stuck to the hard body lures but began to discover that they have a downside, essentially they are expensive and with all those lovely treble hooks on them I tended to lose a lot when flicking them into snags. So, gritting my teeth and grumbling under my breath, I decided to give soft plastics a go again, simply because I thought they’d be cheaper to lose, not that I thought they would actually work in the first place.

So down to Tackle Land I trundled and after chatting to Mark and the team, I left with a lighter wallet and some Z-man 2.5” grubs and some TT Headlockz jig heads. I toddled home, rigged up the Lox with said jig head and soft plastic and with a determined set to my jaw, went down to the local park and headed out on the sand flats for an afternoon of what I suspected to be futility.

Now I’d grabbed some advice from Mark and the team at the same time I grabbed the soft plastics so I found a spot at the end of a drain coming off the flats and started casting. Now the team had told me to cast out either right or left parallel with the shore, imagine this as being 9 on a clock, and then begin my retrieve. They said, once you bring the soft plastic back, cast out again in the same direction but aim a little bit further out into the water, essentially 10 on a clock. They said once you’ve cast out as many times as it takes to get all the way around to 3 on the clock, then it’s time to move up or down the shore line and try again. So I did this, for an hour, cast and retrieve, cast and retrieve, cast and retrieve.

I can tell you now that I was getting more than a little bit bored and frustrated, and then on what I’d decided would be my last cast I got a hit! Only a few meters from my feet my line went tight then peeled off the reel! I was a bit shocked cause I didn’t expect to catch anything but I kept the rod tip up, let him have his run and then proceeded to reel him in. My first ever fish on a soft plastic was a 33 cm Flathead, and while this certainly wasn’t my biggest Flathead, I was still stoked! These soft plastic lures, which I’d thought of as useless, actually worked.

Since my first fish on a soft plastic lure, I’ve begun to use bait less and less to the point where I barely use it at all now. My tackle box is full of lures, both hard and soft and I’ve gone from lazily soaking bait to now actively hunting and fishing with lures. I’ve even started chasing fresh water fish and I can tell you that dropping a soft plastic into a tiny pool deep in the rain-forest and hooking up to a cracking big bass is a far better feeling than catching a bream on a freezer burnt prawn.

So below, I’ve listed the 10 things I have learned fishing soft plastics.

Tackle Land would like to thank Cameron for taking the time to share with us his experiences throughout his Fishing Adventures!

It can be rather daunting when you first start out but Cameron has come through with some cracking catches.

A couple of key points, don’t give up, don’t be put off by going into your local tackle store and asking for some guidance after all we all started at the same place…. The beginning!  For those new to plastics…. Don’t take “Bait” give the plastics a chance to work.

Thanks again Cameron and all the best going forward.