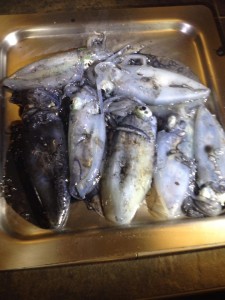 Squid are still available along the Moreton Bay coast Line in good numbers. As this season continues the size of the squid will increase with some Tiger Squid pushing the 1kg mark.

Redcliffe Jetty, Woody Point, Shorncliffe Rock Wall (Near new Jetty) and Manly Harbor would be a few places to search out a feed of Arrows and Tigers.

In most areas look for light Westerly winds for best fishing!

The Shallow Reef areas around Scarborough and Woody Point have been giving up some very nice Snapper over the past few months.

Zerek and the Jazz Lures are proving to be effective Hard-bodies to cast or troll in these areas with good Snapper taken on both.

Mullet, Bonito and Gar flesh baits presented on a Snell Rig or a single 3/0 or 4/0 with minimal lead and light leader has been the formula used to take some nice fish recently.

The Pine River and Cabbage Tree have been home to quite a few nice Flathead. Damian landed a 53cm near the Shorncliffe Boat Ramp on Z Man Motor Oil Curl Tailz while Adam (Teach) got smoked further down stream on Blue Baits.

If you want to give Lures or Plastics a go, try the Zerek Tango Shad, Z Man Curl Tailz, Pig Lure or the Atomic Prongs. Any combo of these should provide a meal of Flathead Fillets!

Fishing the shallow banks, casting lures or drifting a bait generally presents a great opportunity to take home a feed of Flathead.

Margate Beach area is starting to fire up with some nice fillets being battered and crumbed! I would be watching the Pelican Park and Brighton area over the next few weeks for a good show of fish.

I would be using a Paternoster Rig with #4 or #6 Longshank Bait Holder Hooks and a small Bomb sinker. You can also try a bit of Pink or Red Tubing as an additional attractant.

Whiting fishing is great for the kids as many Whiting come in close to the shore which is well within casting distance for the kids!

Well the season is open and the Bass are hungry!

Frennchy & Turtle did a quick trip out to the Dam this week and they landed some very nice Bass.

This guy was taken on a Pig Lure and was released to fight another day.

Taking the family out to the local dams for the day is an awesome way to have a lot of fun but don’t forget to buy your Stocked Impoundment Permit before you hit the water! 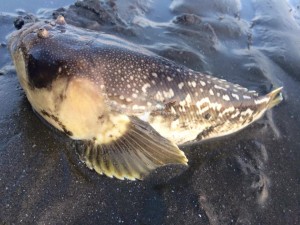 While you’re out fishing keep an eye out for one of these guys, they look every part of “Hands Off” but they really are a nice fish…. The “Star Gazer”

To see these guys in action check out this clip…. Star Gazer Feeding

This one was caught and released by Adam.

Quote of the week –

Enjoy your week and “Maintain the Passion”