Tilapia live in our freshwater ecosystems, but can also tolerate water that contains low levels of salt. Tilapia prefer warmer water temperatures such as our Queensland Fresh Waterways where they breed uninterrupted. Since the introduction into our waterways, Tilapia have become problematic invasive species and populations have flourished to a point where our Native Species are placed in danger of being wiped out in certain areas.

Large individuals have been reported to prey on small fish and occasionally cannibalize their own young if food is scarce of if the young are not quick enough to leave the males area.

Tilapia are readily caught as a by-catch by fishermen targeting species such as Australian Bass, Spangled Perch, Freshwater Mullet & Gar.

Angler interest in tilapia has spiked with the Call to Arms in the attempt to stem the spread of this noxious pest. One good thing the Tilapia has going for it is the fight it puts up for fishermen using light tackle, it is a great Sports Fish for the whole family to enjoy!

At the end of the day, Department of Agriculture, Fisheries and Forestry consider them invasive species and we all must treat them as such. Unfortunately the following is the hard and fast fact:

Tilapia have it over our Native Species, they will tolerate low dissolved oxygen levels which normally kills the local guys, Tilapia can utilize atmospheric oxygen when water oxygen levels drop.

Most of the Tilapia are known weed eaters and normally will not take baits presented by fishermen, however other species of the Tilapia family will readily take baits such as Garden Worms, Shrimp, Bread baits, insects and Corn!

It is no wonder that Tilapia take over the waterways, check out their breeding habits:

Effectively we need to remove as many of these fish as we can from our waterways however we need to do it in the right way. The last thing we want is for people to receive hefty fines for breaching the Law.

Some things to remember:

Now, if you have a set up ready to go fishing for Bream or Bass then you are ready to start culling a few Tilapia!

Some people make it a bit more interesting by using a “Pole” or simple Hand-line” but most prefer to stick with the standard “Spin” outfit.

As we said, a rod and reel combo used Bream or Bass will be fine for the job, generally a rod around the 6’-7’ and either 1-3kg up to 2-4kg. Graphite or Fiberglass will be fine, really it is whatever you would normally use.

With the Reel you can start with a 1000 series and work your way up to a 2500 series reel, anything over this will be overkill. However if your gear is larger like a 4000 – 6000 series reel, you don’t need to go out and buy another one which is smaller. The idea is to use what you have and enjoy the time!

If you want to add a bit of “Sport” to the occasion then drop your mainline down to a 3-6lb if you are using Braid or Fireline and about an 6-8lb if you are using Mono. Some of the Tilapia we have found are around the 2kg mark, so imagine the fight you will have on light gear! 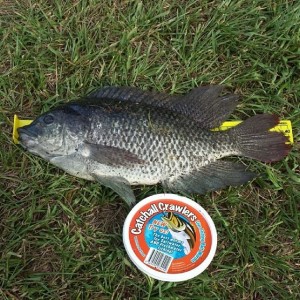 Tilapia can be rather picking on some days and will not touch a bait regardless of what you throw at them! Other days the will eat just about anything.

Some of the most effective baits used to date are:

A lot of people believe that Tilapia will not take lure however they are known to attack other fish species. Z Man GrubZ, Berkley Shrimps and Isome Worms are just a couple of plastics which have lead to the demise of many Tilapia. Anything around the 2-3” range seem to be on the menu so don’t be afraid to get out there and test out your own collection, the results might just surprise you!

Small Shallow Divers and Vibes are also effective on Tilapia, fishermen chasing Bass and Yellowbelly sometimes end up with a fight on their hands once a Tilapia decides to strike their Jackal, Rapala, Maria or Atomic Hardz. Lures do not need to be expensive and after all you are going to be fishing in reasonably snaggy areas so be prepared to lose a couple of lures or be prepared to go for a swim.

When catching Tilapia we must be mindful of the Queensland Regulations and Legislation in place for the disposal of Noxious Species.

In a nutshell we are not permitted to remove Tilapia or any part of that Tilapia from the area of capture which includes the “Fillets”. Best advice is to place them in a bin, bury them or place them well away from the water but in the same location!

To avoid fines of up to $220,000 please follow the direction of Department of Agriculture, Fisheries and Forestry. I have included an extract from their page and the direct link is available at the bottom of this document.

What to do if you catch a Tilapia or Carp

If you catch a noxious fish, kill the fish as quickly and humanely as possible. The most appropriate method may involve stunning the fish via a sharp blow to the back of the head causing brain destruction.

It is an offence to have noxious fish (such as carp and tilapia) in your possession, either dead or alive (except dead Nile perch). You must therefore dispose of the fish as soon as practicable after killing. It is recommended that you do this by burying it a suitable distance from the waterway where it was caught or disposing of it in a rubbish bin.

Referenced Documents and Thanks

I would like to Thank Danielle from Department of Agriculture, Fisheries and Forestry who has helped out with some vital information regarding Tilapia and ultimately saving fishermen valuable money in unwanted fines!

While putting this document together I used snippets of information from the sites below. More comprehensive information is available from these sites so check them out if you get a chance or if you need more indepth information.