Living right on the edge of Moreton Bay tempts one to go fishing as often as possible, but the good fishing points are a few kms away either at the Shorncliffe Pier or up round the Ted Smout bridge and being a bit lazy I have no wish to walk with all of my gear to fish.

Tackle Land and Roscoe Canoes & Kayaks teamed together to demonstrate various canoes and Kayaks one weekend and I had to go and have a look. Once there a canoe caught my eye well had to try it out, I made up then and there to buy one. Looking at the budget, I decided that I could purchase one in a few months and so set about putting some money aside to buy one, a 14 foot, 2 person model so that both myself and my daughter could go out and have fun.

Amongst other things, I do kerbside collecting and I do collect quiet a lot of handy things as well as scrap which provides for a little additional money to fill the coffers, it’s fun and surprisingly you find all sorts of things that people throw out some collectables, good wooden furniture and handy bits and pieces. Well we came around into a dead end looking for various bits and pieces and you probably guessed it, here was a Rosco 16 foot, 2 person Canadian Canoe  that someone had decided to throw out.

We pulled up and had a look, it was pretty dirty but in relatively in good condition. We decided to throw it on top of the fourby and the owner of the canoe came out and gave us a hand to load it. My mate passed the comment that all I needed were a couple of paddles and I would be ready to go, well to my surprise he went inside and came out with two brand new paddles to give us, telling us that he would not need the paddles anymore as we were taking the canoe.

Well that took care of the propulsion mechanism; I was pretty well ready to go. What gets me even now is that brand new these cost $1950 without the paddles, so savings from finding this on the kerbside over $2000, a bonus for me.

Now the fun begins, firstly cleaning it up and the picture below show you what had to be done: 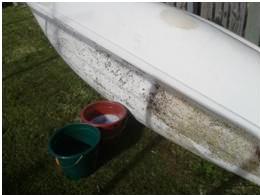 Here we see the first side, which was the first to be cleaned compared to the other side which was still covered in mould, surprisingly it took three hours just to clean the bottom it was that bad but in the end.

She looked like this, and although there was some touch up Paint marks on the bottom, it was in excellent condition and quite water ready. I couldn’t wait to get out in it and try it out, at the same time feeling that I had made an excellent find.

I have later found out that it is about 14-16 years old. After cleaning the inside of plain dust she looks like this.

Having owned a 16 footer many years ago and merrily paddling my way down the Mary River and other places I was looking forward to getting out on the water and so the story continues.

Now getting onto the bay it a little different to paddling on a river, so had to do some thinking as there are things called waves, winds and tidal currents that have to be taken into consideration, and there is the problem of getting it from the yard to the water so;

What Shelby has to say about the canoe?

“When dad got it I was so surprised it was awesome when I went into the canoe for the first time I was doing better than daddy. We were doing canoeing for over an hour and when we came back Mark the owner of the Tackle Land Bait Tackle saw us doing the canoe and posted photos on Facebook”

Tackle Land would like to thank Ian and Shelby for taking the time to bring you some of their experiences with a New Canoe.

If you are a first time Canoe or Kayak user it can seem a bit overwhelming so reading articles or post such as this one will help you gain the basic experiences you need. Hopefully you will be able to avoid some of the “Traps for Beginners” and have a more pleasant experience.

If you would like to talk to someone about finding out which Canoe or Kayak best suits you, some dealers have open days which gives you a whole host of models to play with!

If you would like some professional advice drop in to Rosco Canoes & Kayaks at Kedron and talk to Allana and the Team or jump online at: http://www.roscocanoes.com.au to view their range and to get more information on their open days.

Happy Times on the Water & Maintain the Passion!